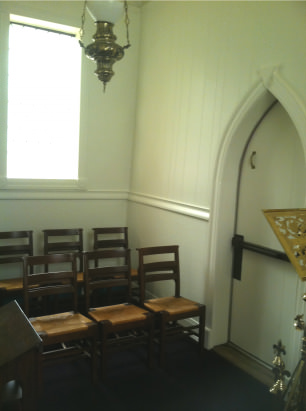 In recent years Christ the King Chapel (located behind the pulpit and organ) had been used as a storage room as opposed to a worship space. Under the direction of Junior Warden Brad Adams, the chapel has cleaned, restored and ready to be used again as a worship space.

While not originally designed as a chapel, it was dedicated as such once the congregation had a parish hall. During the season of Epiphany, 1967, the chapel underwent a major renovation as a memorial to Mr. W. W. Lewis (See Vestry minutes). A small plaque at the hallway entrance to the chapel commemorates the renovation.

This summer the chapel will be once again be used as a worship space. A service of rededication is being prepared by Fr. Wylie. An appropriate announcement concerning date and time will be forthcoming.

From the February 1967 Vestry minutes (Noted that the Memorials Committee would like the renovation of the Chapel of Christ the King to be accepted as a Memorial to Mr. W.W. Lewis. He had been interested in this and had done some with the project prior to his death. Motion of approval made by Mr. Guy Gilliam, seconded and passed. Memorials Committee report filed.

Submit your Parish News to be featured on the website and in The PEW.